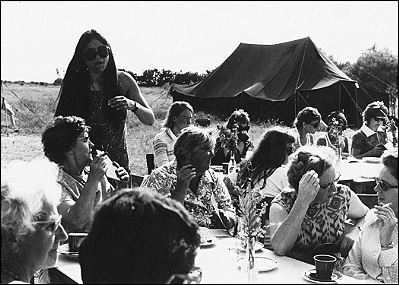 I was probably 5 or 6 years old, when my mother, her cousin and 2 other women in our community house plus their 2 children decided we should go on a summer festival together. Great idea! Weather was superb and we had a whole week together to play and chill. Our destination was the National Women’s Camp during the infamous ‘Lesbian Week’. The camp was located on a small Danish island called  ‘Femoe’. Come to think of it that would roughly translate into ‘Femme Island’ in French/English. The Island is small, but it also hosts a famous jazz festivals, which took place in the same week. 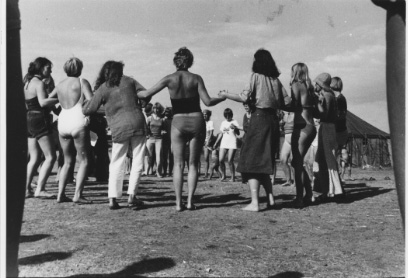 My mother was never lesbian, but she liked the female community and support of women. At this time (1981) the sister hood was very strong. This camp was only for women and boys under the age of 12. You were allowed to be in the nude or wear whatever little or much you wanted. We learned songs to manifest the female spirit, sexuality and organs. It might sound a bit weird today, but it really wasn’t at that time. I didn’t think much of the nudity, the sexual orientation or anything else. Today I still don’t have any problem whatsoever with nudity or difference in sexual orientation. But back then, I was so young and most of the time I ran around with my friends playing on camp ground or on the beach. I had a great time. 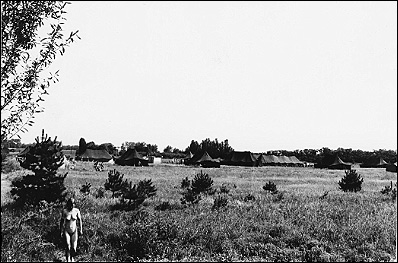 We all slept in huge tents with room for 12 people or more. One night a bunch of  men who must have been bored at the jazz festival decided to pay the Women’s Camp a visit. I guess they were drunk and thought it fun and alluring with so many women attending ‘Lesbian Week’ right next to them. I recall some of the men trying to get into the tents, which resulted in a huge scene. Some of the more militant women at the camp threw the poor lads out on their knees and elbows. So much for a lesbian fantasy boys …  😉

I do recall that my mother took me outside the camp almost every night alone to get ice cream. I thought she did it to spoil me. Later, I found out it was because she needed a break from the whole lesbian scenario.

Stay tuned for my next post tmro ‘Quiet House with Dad’.

My Community House Life with Mom

Adventures and Quiet House with Dad